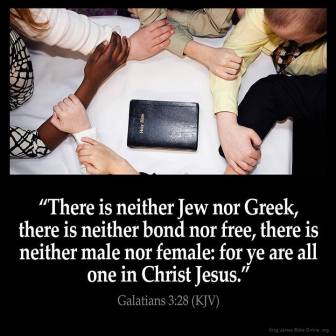 During my life, I have seen Christian attitudes change. Sometimes for the better and sometimes for the worse, but the love of God is for everyone, regardless of your nationality or creed. This is the message that Jesus taught and it is the same message that all believers in the world should be taking to the rest of the world today! Why should we do this? Because Jesus would do it if He was still on Earth doing His ministry today and that is why we are supposed to take His message to ALL over the world!

There is no reason that we should not tell others about our Savior, regardless of where we might go or who we are talking to. Everyone needs Him, regardless of their religion or their doctrine and they need to make that decision today. Why? Because today could be your last day on this Earth. We are not guaranteed tomorrow, so seek Him and believe in Him today! Your salvation and your eternal destiny depend upon your decision here and now. Once your life is over there is no second chance to make it right.

Make sure of your salvation now while you have the time.

There are so many divisions in the body of Christ today, until I am sure that Satan is truly amused by it all. We have many denominations, some of which don’t or won’t talk to each other. Then there are divisions between black and white congregations. Many people call this racist and segregationist but the problem is that we are not different races! If you truly believe the Bible, then look to our original parents, Adam and Eve. They were both likely of a dark complexion, not one or the other, and yet many or all of the “races” came from them.

The body of Christ cannot be and should not be divided during this period. Why? Because we are nearing the end of the age, the body of Christ shouldn’t be divided. We need to be standing together in the unity of the Holy Spirit, not pointing out our differences and our doctrines which don’t line up exactly.

Our life as children of God needs to be in cooperation with each other and with Him. Our beliefs as Christians shouldn’t so far enough apart as to separate us this much. But, just as the political parties which can’t get along or agree about much of anything, we seem to have the same problem. One church believes that the Lord’s supper should be done at least once every month, another might say that once or twice a year is good enough.

Traditions and man-made rules and regulations are the kind of burdens which Jesus spoke against in His Earthly ministry. As long as we are communing with God through prayer and study of His Word and celebrating our freedom in Christ by having fellowship with other Christians, rules…especially man’s rules need not apply!

A written copy of a church’s “discipline” or creed doesn’t carry the same weight as God’s Word, yet some treat them as if they do. How can we call ourselves Christians, when we treat those in the church like cattle and we don’t even show the love of God to those outside the church doors! Today, there seem to be many “houses of worship” which don’t worship much more than their own self-image!

Get back to true worship of God and His Son. Come back to your first love and if you never really belonged to Him or He to you, then humble yourself and stop being so self-centered! The only place that kind of thinking will get you is on a very slippery slope to hell! If you have never heard of that place in a sermon, then you certainly need to read God’s Word, because you don’t want to spend an eternity there!

We, as Christians, need to be united because there are so many people against us these days. Even the DHS has evangelical churches on their watch list. Don’t believe it? Look it up! I have seen and heard this in the news. Maybe not on the “major networks” since they only report things that they are told to report, but on Fox and on Glenn Beck’s network they do. Yes, this labels me as a radical Christian, but I don’t cut people’s heads off, I am trying to save their souls by showing them the true Savior, Jesus Christ!

If that is a crime, then I am guilty of it and will go to my death with it if need be! My eternity is secure and I pray that yours is too.