Skip to content
RuralPastor50 Abide in Him, Accountability, Anger toward God, Bad and good behavior, Believe in the One Who saves, Religion, Trials in life October 18, 2017 3 Minutes 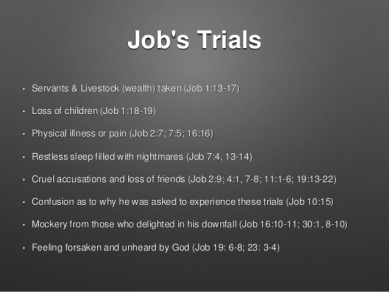 This book has always fascinated me because according to some scholars it is the oldest book in the Bible. It is an account of a man who worships God and acts as a priest for his family, offering sacrifices for their transgressions regardless of whether they have asked him to do so or not. In the beginning of the book, God is meeting with “the sons of God”, those angels who are tasked with watching over humanity at the time, I suppose. Then Satan shows up at the meeting and God brags about how righteous His servant, Job, is.

Job’s trials did not come upon him as punishment for something done wrong, but because of his exemplary life! His trials came to him because God wanted to prove a point to Satan about his servant Job. To make a long story short, everything was taken from Job, even including his health, but he never cursed God even though his wife told him to. He never truly blamed God for his situation either. At the end of the book, God speaks to Job and his “friends” who have not really helped the situation, and He straightens their conception of Him out in a hurry.

Why is this story so important to us today? Because, it is indicative of our lives in some ways. Every person on the planet can identify with Job in one way or another. From being stricken with disease like cancer to losing much or all of your belongings, there is a bit of Job in all of our lives at some point in time. The best part of the story is this: God loves you regardless. Particularly if you don’t give up your faith in Him! He is faithful to bring about all your blessings and to protect you from Satan and his demons.

So….why do people look for another god or religion to make them feel complete or whole? Mostly, it’s because of Satan and his influence on the minds of people who haven’t given their heart to Jesus. He can manipulate and coerce people into believing in doctrines and practices which have nothing to do with God, but he can make them sound as if they did. That is the reason why people have broken the church into so many pieces and invented their own religions and their own idea of who god is and what he asks of us.

The biggest problem with this god which they follow is that he lives in their mind only and he isn’t real. They believe that he is, sometimes with their whole heart, but they have been deceived by demons, giving them the idea for this to replace the real God and Savior, Jesus our Savior. Some of these people even preach this kind of “religion” from a pulpit and make it seem to be the real Truth! They pick and choose scriptures which support their beliefs and they don’t dig deep into what the context of the Scripture actually says.

God loves each of us and He wants us to come to Him to be saved through belief in Jesus who paid our price on the cross. If we can and will read His Word and pray about finding His Truth in it, then we can see the difference between man-made religions and God’s Son and the church which began almost 2000 years ago. Learn more about Him through reading His Word, pray about what He says in His Word, and ask Him to reveal the Truth which is there for all to find if we will look for it diligently!!

Life is too short to waste it looking for meaning in a life which hasn’t found the path to walk on which leads to Life eternal! There is only one Savior and He isn’t in the Koran or in any other book except God’s Word. His name is Jesus the Son of God, any other name or person is not a savior nor are they able to save your soul to get into eternity! Please, read God’s Word with a prayerful heart and ask Him to show you the Truth which is in it because at the end of your life, you will have to give an account for the reason why you didn’t follow Jesus. Especially if you have ever heard the gospel preached or read the Bible!