Skip to content
RuralPastor50 Abide in Him, Accepting Christ is your choice, Accountability, All in or not, Believe like a child, By faith, Choose Christ, Healing and hope, Religion, when you feel His call in your heart February 25, 2017 2 Minutes

No, I am not posting about hope and change, we have had the first dashed to pieces in the last eight years and the changes in some areas are almost unbearable. Enough soap boxing. (Jedi mind trick–forget what you just read, it isn’t important).

Hope is a cousin of faith because both of them run together. You can’t have much hope without faith and faith without hope isn’t expecting much. Abraham expected (hoped),with faith in God’s ability to fulfill it, that he would have an heir just as God had told him. How it was going to happen wasn’t important really, he had faith that God could do it even at his age and his wife’s age as well. Would doctors today recognize this birth as a miracle? Absolutely, in light of it being one because there was no way it could have happened without God’s intervention!

Faith is important to our life in Him because we were never meant to live apart from Him. Though, now we need faith to do so because He is just outside our limited human vision just as the beauty of His Creation is as well, although we will see it one day. Amen. God loves each of us, whether we belong to Him yet or not. He has a plan for our lives in His Kingdom if we will accept our place in it! 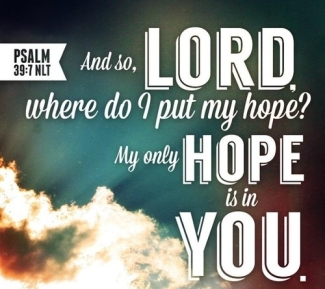 Hope is where we should put our faith and our trust totally in the Lord. God loves you with an everlasting love that never dips up or down. He doesn’t love you today and hate you tomorrow! We and everything around us, every person, every animal, every star and planet are His Creation and He cares for all of it!

We are not special because we live on Earth, we are special because God loves us! He know what you can do and what you did yesterday or last week or even last year, but He loves you anyway! Why? Because He is God and He is Love perfected! There is no darkness or shadow in Him, He is Light and the Giver of Life itself!

Satan cares NOT for you, in fact he HATES YOU!! You and I are made in the image of God, he hates God, so you are hated by Satan and his demons. That is why there is so much war, so much disease, so much cancer attacking children and older people, because of demonic influence in your life, against your life in Christ, trying to turn you away from God by getting you to blame Him for your problems!

That is the way of our world because he, Satan, is the ruler of the air on Earth…but only temporarily. He knows that his time is coming to an end and that is why problems are getting worse, wars and more intense, diseases are harder to cure. He knows that he has already lost, but he is going to try to take as many people into Hell with him as possible. Not to have a party, but to torment them for eternity because they were offered a way out of Hell through belief in Jesus and they chose not to believe in Him